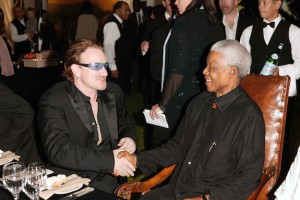 CAPE TOWN, SOUTH AFRICA – NOVEMBER 27: Nelson Mandela with singer Bono at the Thanksgiving Dinner prior to the 46664 concert on November 27, 2003 in Cape Town, South Africa. The concert will take place on November 29th and will benefit the Nelson Mandela Foundation and the fight against AIDS in Africa. Artists performing will include Bono, Queen, Peter Gabriel, The Eurythmics, Beyonce, Youssou N’Dour and many others. It will be one of the biggest rock events ever staged in Africa and will also be the most widely distributed media event in history with a potential audience of more than 2 billion people in 166 countries. (Photo by Getty Images)