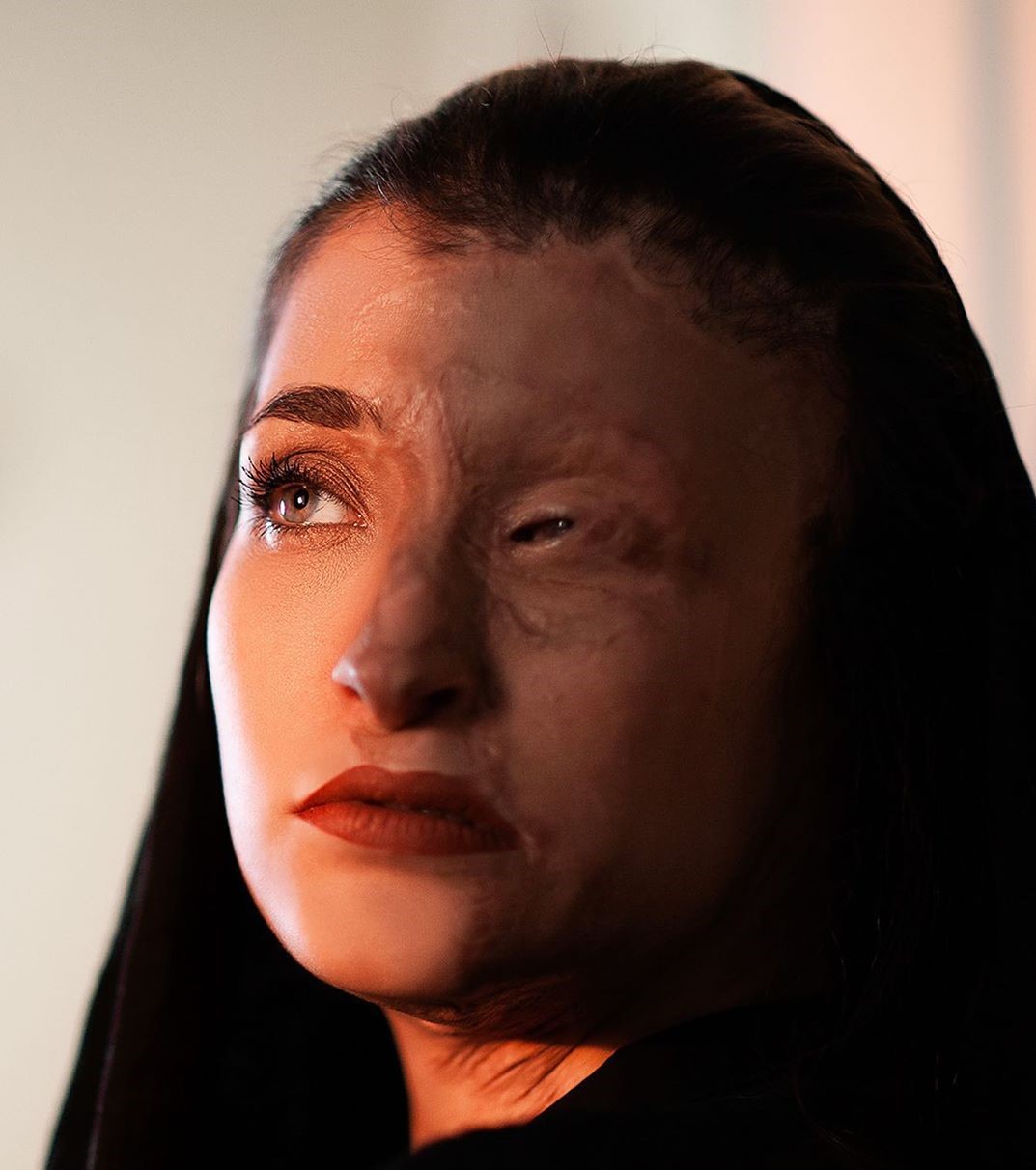 She is Marzieh, one of the strongest women I have ever met. I took this photo a while ago, in Iran and today, after having her consent, I decided to post it. Marzieh was driving in Isfahan, Iran, six years ago, when two men on a motorcycle came close to her car. One of them threw acid on her face and then they ran away. Police never caught them, although the street was surveyed by video cameras. There were a few other similar cases in Isfahan, in the same year, and the perpetrators have never been caught. All these horrible acts were directed towards women who were not wearing conservative outfits. Many Iranians believe that these attacks were made in complicity with different authorities to discourage women from adopting a more liberal way of dressing. But both national and local authorities denied any involvement. Today Marzieh is trying to raise awareness about these terrible attacks and advocates for the ban of acid sales. Although she started to cry when she remembered that horrible day, she wanted to tell me the whole story. Then she smiled again. It was the smile of a powerful woman, who found the strength and courage to overcome the suffering and to fight for her cause every single day, so this would not happen again to other women. Dear Marzieh, incredible women like you are the reason I’m doing this project. Thank you so much for showing me the purest form of beauty. 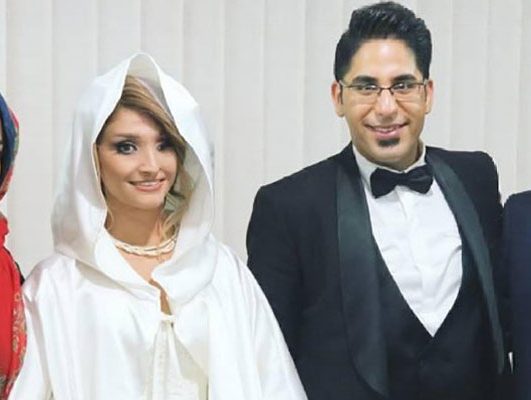 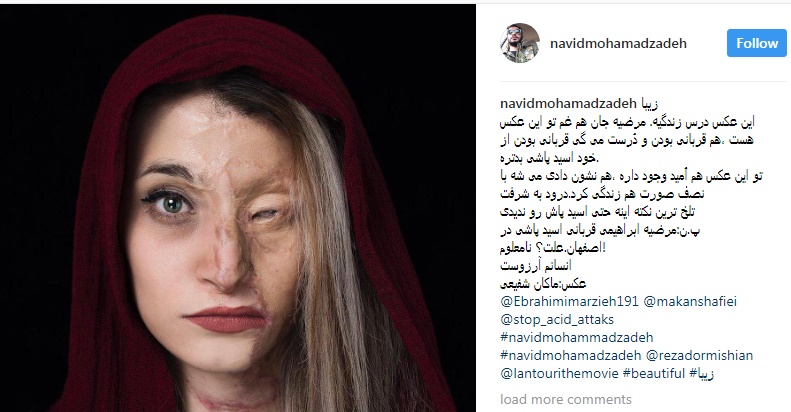 Northern Vietnam, with its spectacular landscapes, fascinating ethnic groups and beautiful stories, has a special place in my heart. Here people have to work hard to earn a living. The beautiful hands of this woman say everything. But when I met her she didn’t complain about anything, on the contrary, she was happy to talk about her past. Di is 86 years old and she is a Hmong. She told me that she had a very beautiful life, together with her loving husband and their five children. 15 years ago her husband passed away and since then she has never taken off these earrings, made by him. Beauty shines everywhere and so does love.

She is Natalia. She has exactly the same name as my daughter. Even their age is close. I met her in Peru, a few months ago, in the Andes Mountains, where she lives with her family in an isolated village, far away from the modern world. Here she will learn to weave, she will learn the medicinal herbs and she will learn to coexist with nature. Meantime my daughter Natalia will live in a global world, mostly in modern places, learning foreign languages and developing her passions. Since I started The Atlas of Beauty I always had a dilemma. How should we support people from remote traditional communities? Their life is really hard, compared to ours. But is it okay for us to change it and bring our lifestyle to their communities, assuming that this will help them? Will their new life, besides being more comfortable, be truly better? If not, how can we support them without spoiling their culture? Are we, those in modern places, more aware of what they need? Definitely not. So who are we to decide for them? They never try to decide for us. If we try to teach them our modern values, aren’t we condescending? But if we ignore their struggles, aren’t we ignorant and selfish? It’s a complicated issue and we should maybe find a middle way, but that’s not easy. Who knows, maybe someday my Natalia and this sweet Natalia will have the chance to meet and sort this out. Maybe their generation will find a fair answer to my dilemma.

For a musician, the competition is incredible in Cuba. Probably nowhere in the world you’ll find such a density of extraordinary musicians. So to make it to the top, besides talent, you need years and years of practice. I met Yansa last October, on the colonial streets of old Havana, where she was playing with her band, at a terrace. Here the best music is on the streets, at terraces, in bars, not so much in concert halls. Yansa plays the flute since she was 8. While most of the other children were outside, playing, she was inside, practicing hard, defying the heat and the tiredness. But she told me that all the sacrifices worth it. Today she can make a decent living from doing what she loves most. More than that, she also supports her parents, financially. She knows how many efforts they did for her and now she’s happy to help them too. Economically speaking, there are many shortages in Cuba. Humanly speaking, there’s definitely no shortage of beautiful people. #Cuba #TheAtlasOfBeauty #AroundTheWorld

It was a day of September, last year, when I visited Barton Spring, in Austin, USA. This is a place where people come to relax and swim. Looking around, at all those perfect bodies and the splendid landscape, you could feel like on the set of a photo shoot for a glamorous magazine. But for me beauty is much more than that. When I noticed Veronize and her serene expression I instantly knew that I want to photograph her. Veronize was mega surprised of my proposal. But she was equally thrilled. By chance that was the first time in her life when she was wearing a two pieces swimsuit. Sometimes things happens for a reason and maybe that’s why I was there, in that day of September. Veronize just started to work on accepting her body and that was one of the first steps. But on the way there were many years of struggles. Her parents emigrated to the States from the Dominican Republic, dreaming that their daughter will have a better life. They created a unique name for her, combining their owns, Veronica and Ezekiel. Veronize was bullied since she remembers. She was only 12 years old when somebody spread a rumour in her school that she was pregnant. And that was just one of the dozens of episodes when she was humiliated because of her body. But with all the suffering, she remained a kindhearted person. Love was her answer to all the hate. Today she works in a holistic shop and she seems the kind of nurturing person who takes care of her beloved ones whenever are in need. Dear Veronize, not only that you have a special and beautiful name, but you are also a special and beautiful woman. #Austin #TheAtlasOfBeauty #AroundTheWorld

Yin Yin and her never ending hair on the streets of Yangon, Myanmar in 2018. Back then I was 6 months pregnant. Now I’m in Europe with The Atlas of Beauty, on my first journey with my daughter, and my next destination is Lisbon, Portugal. @mihaela_noroc #TheAtlasOfBeauty #AroundTheWorld #Myanmar

Before each Christmas, in this small village in northern Romania, teenagers like Ema change the modern clothes to traditional outfits and join the local folkloric music group. They go into the surrounding towns to sing carols. It’s freezing cold, but their voices bring a lot of warmth. I took this photo in 2014, but this lovely traditions are taking place every year. I feel privileged that I come from a place where there are still people connected with the good things from the past. Merry Christmas!